May to November – our solar battery data

The latest update – 7 months with Bert our Wattstor battery (May to November).

November here in Wales has been pretty murky until the last week. We also lose the sun over the hill behind the house at around 2:30pm at this time of year.   The lead acid batteries only ever operate between 50% and 100% capacity. In the summer, the batteries would regularly fill to 95-100% during the sunshine hours and then empty each night down to ~50% before switching off. Now the solar isn’t providing many Wh to the battery, the Victron controller switches off the battery when it drops to 85% . Basically it releases roughly the amount it has captured that day so allowing it to cycle around in the top end of its limit (rather than the bottom) to better preserve the battery.

This chart shows the daily Wh averages – our daily demand, the solar PV input, the amount we’ve had to import from the grid and the amount we’ve exported to the grid because it’s more than the battery can absorb at that point in time.

Our daily electricity demand stays roughly the same – an average of just over 8kWh per day. Charging our electric Twizy a few times a week makes a big difference to that day’s consumption and, unfortunately, those extra kWh are all coming from the grid now.

The sun meanwhile, as John Donne so eloquently points out, “is spent, and now his flasks send forth light squibs, no constant rays” – the “light squibs” in our case amounting to a paltry 3 kWh/day. This means that, for the first time, we are importing more from the grid than our solar is generating.

We continue to export a small amount to the grid each day (612 Wh). It’s hard not to resent this but it happens when the solar at midday is generating more than the battery can absorb.

The 2nd chart shows the proportion of the electricity we have used each month which is provided by each source – either directly from the solar panels or from solar stored in the battery or from the grid. 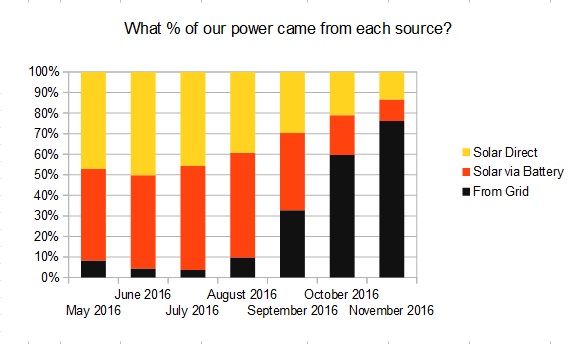 Unfortunately, most of our electricity (76%) is now coming from the grid but 24% is still coming via the solar and this would be down to 13% without the battery which is still making an 11% contribution.