We have now had our 6kWh Wattstor solar battery (nicknamed ‘Bert’) for a full 12 months. (It actually holds 12kWh but only half of that is used by the system.) It was installed by Gwent Energy CIC. Previously, we simply had a 4kW array of solar PV panels on our house in the Brecon Beacons so only benefited from using the power generated whilst the sun was actually shining. The rest was exported to the grid.  Our PV panels face WSW and we do have a large hill and some trees behind the house. There are two of us living in the house and we work from home. We cook on electric

and also have a Renault Twizy which does ~3000 miles a year (all our local journeys) which consumes around 430 kWh a year.  As it happens, the Twizy also has a 6kWh battery and there are times when Bert and the Twizy are in direct competition for the solar power. We try to avoid the Twizy charging directly from Bert, the Wattstor battery, as that would involve two lots of battery cycles. But managing charging the two to optimal effect is complicated. Certainly it has left us questioning the practicality of using one’s electric vehicle as one’s domestic storage. 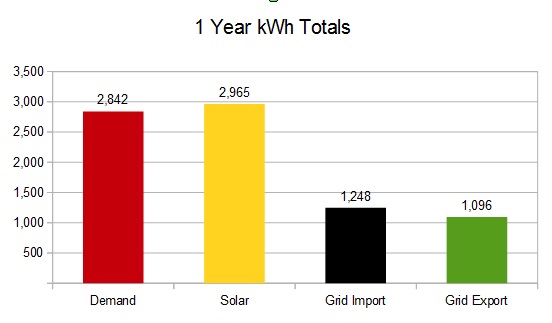 We have consumed 2,842 kWh of electricity in the year (averaging 7.8 kWh/day on a fairly consistent basis). As it happens, our solar PV has generated almost exactly the same amount as we’ve used (2,965 kWh). We have imported 1,248 kWh from the grid and exported 1,096 to it. Our batteries are currently lead acid. With a larger battery pack plus a more efficient type, then we would be able to capture and use more of the solar energy generated and export less to the grid. Lead acid batteries only use 50% of their capacity and protect themselves by stopping providing power to the house long before they are empty.  We hope to upgrade the batteries at some point in the future.

The next chart shows the overall percentage of power which has come from each source.

Effectively, the introduction of the battery store has doubled the amount of solar PV energy which we use compared to previous years when we only had the solar panels. So that’s good. In terms of savings, we buy our electricity from Good Energy at 14p/unit so the battery store has saved us £110 this year meaning that the addition of storage isn’t currently an economic winner but does mean that you get twice the benefit from the solar you generate.

The next 2 charts show the performance pattern across the year from last May.

Our demand has stayed relatively steady across the year apart from when we have been away from home. The solar generation inevitably falls right down in the winter months – December’s nadir being a mere 2.3 kWh/day (however that is still more then 25% of our demand). The best month for solar generation happened to be May last year but May/June/July are all fairly similar with the length of day and the angle of the sun high in the sky. April is now getting back up to those levels. As the solar drops, the amount we import from the grid inevitably rises. The only slight surprise (and disappointment) for us was the proportion we exported to the grid in the depths of winter as we’d obviously prefer for all excess to be stored by the battery. This happens because the batteries mostly operate on absorption charging and any excess is therefore exported despite the battery having plenty of storage capacity.

The final chart shows the percentage of power from each source month by month over the year. 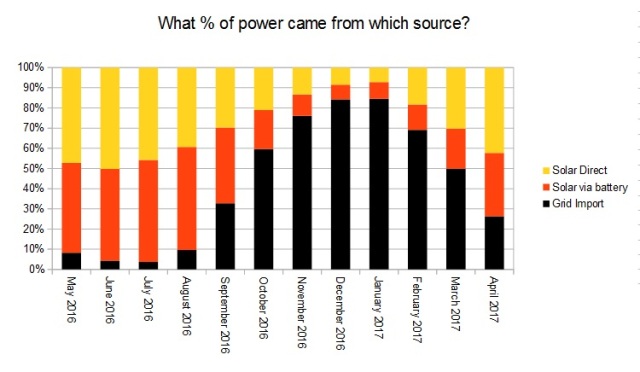 From May to August, we were happily living off grid for days at a time with the solar PV covering all our demand during the day and Bert-the-battery supporting us through the hours of darkness. And in deepest darkest December, the solar plus battery still covered 16% of our demand moving up to just over 30% in February and 50% in March.

One side effect of having solar PV plus storage, is it makes you much more aware of the energy you use in the house – especially when cooking supper (for example) rapidly empties a battery that you spent most of the day filling! In particular, it certainly makes one less blase about owning an electric vehicle. The good news is that the Twizy (because it’s so small and light) consumes only 140 Wh/mile. Given the power and weight of a Tesla Model S, for example  it would happily wipe out Bert’s 6kWh store in minutes!