An Experimental Mix of Birds, Psychology and Art

For the past year, I’ve been a member of the ‘Larks and Ravens‘, an experimental group of two artists and a psychologist. We’re exploring how to create visual contexts which trigger people into seeing their world differently for a moment.

We hope this will stimulate conversations about topics which affect us all but which we rarely discuss with one another. Examples include: climate change, death, economics and social inequality.

Following a few one-off events, the Larks and Ravens has just finished its first ever installation in the Tobacco Factory Cafe/Bar in Bristol which ran for 10 days during September. We were delighted that the Tobacco Factory offered us this opportunity to explore some of our ideas in a friendly, flexible space frequented every day by a large and demographically varied population. People use the Cafe/Bar to grab a Latte, work on their laptops or hold informal business meetings. Mothers with babies use it to meet for lunch and chat. Single older folk come in each day to sit and read the paper, chat to others and enjoy the food and drink. Mothers and carers pop in with their children after school and then, after work, it becomes a noisier, busier crowd with a younger demographic.

We called the installation ‘Space Exploration : Climate Change Conversations’ and it involved 3 elements.

Questions – around each of the tables in the cafe, we placed an array of 30 plus questions as a way of catching attention and stimulating conversation while people sat and 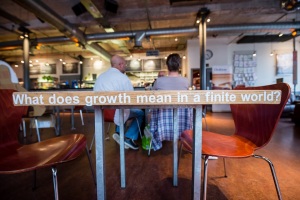 drank or read their laptop or paper. Examples included:-

Booths – we constructed and installed 4 booths. These were made of recycled cardboard and the idea was to introduce mini spaces or contexts which people could step into and reflect on or respond to questions about climate change within those different environments. This idea was based on psychological evidence that our behaviours are governed to a significant extent by our current situation or context. Even our bodily positions (standing upright, sitting down, fists clenched, arms folded, etc) as well as whether our immediate environment is comfortable, uncomfortable, hot, cold, clean or dirty can affect our outlook and responses to seemingly unrelated topics.

We recognised that we encounter such booths in our everyday lives – each carrying its own meaning and emotional or behavioural associations. The 5 booths we constructed were as follows:-

A shower booth – a space associated with privacy, intimacy and cleanliness.

A confessional booth – a space associated with religion, guilt and confession.

A communications booth – a space associated with contacting and talking to or listening to voices elsewhere.

A photo booth – a space associated with appearance, image and identity. Unlike a standard photo booth, we covered ours with a reflective material which distorted images. We hoped this would help people realise that everything we see is distorted in some way or another.

A polling booth – a space associated with civil responsibility and individual choice.

Because of limitations of space, we didn’t install the polling booth in the end.

Spectres – at our previous events, we had experimented with introducing various ‘spectres’ – faces and figures who are either influential voices in our current world (e.g. George Osbourne, the pope, Jeremy Corbyn, Malala Yousafzai) or represent symbolic voices like scientists, artists, children and gods. We have found that the spectres create visual interest, provoke a reaction (both

positive and negative) and, hopefully, help people recognise the presence of such voices in our lives and the effect they have on us. In the Tobacco Factory installation, we created some of spectres from cardboard and sat or stood them around the space. We also provided some ‘spectres on sticks’ in the photo booth so people could opt to take selfies with their favourite spectres.

On the last evening, we ran an open event inviting people to discuss the issues raised by the installation and respond, if they wished, by writing or drawing on the tables and/or the booths.

At one level, it’s hard to know what happened as we were only present for short periods during the 10 days that the installation was in place. We did invite people to give us feedback via Twitter, text messages and voicemail but this didn’t happen to the extent we had hoped. We overheard some friendly feedback – people 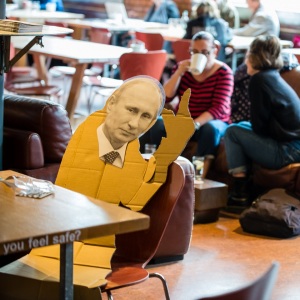 who enjoyed “having tea with the pope” or “sitting close to Death” and we enjoyed watching children using the spectres to play with as puppets in the photo booth. We also witnessed some hostile reaction – people not liking their social space being invaded with challenging questions or images (or artists making things!) or declaring that they “don’t believe in climate change”. Some questions caused offence (e.g. “is environmentalism religious?”) as did us being seen to be playing with images of respected public figures.

The installation certainly made a visual impact on the cafe/bar area. The questions round the tables were eye catching. The booths looked curious and inviting although locating them appropriately in the somewhat crowded bar space was less than ideal. Some of the spectres (most notably death!) ‘looked the part’ and inhabited the space very naturally. Other spectres weren’t as well constructed (by us) or looked awkwardly out of place.

The photographs taken by Jon Phillips of Muen Photography were compelling in the way they juxtapositioned random questions with people chatting or reading at tables.

However, the irony was that most people actually ignored the ‘eye catching’ questions on the tables – possibly not even registering their presence. This makes Jon’s photos even more powerful as an illustration that these questions (and others like them) might be all around us every day but we ignore them or are unaware of them because we are entirely focussed on our everyday

conversations and concerns. Studies have shown that  perception of an environment is dependent upon people’s internal goal states. For example, people see desirable objects as being physically closer to them than undesirable objects. Such effects may be one of the major learnings from the installation.

Similarly, we had hoped that the 4 booths would spike people’s curiosity (“what the hell is that doing there?”) and encourage them to step inside different symbolic contexts which could affect their behaviour and responses to the climate change questions posed. We certainly found that entering one of our booths (particularly those with curtains) felt different – certainly a ‘stepping out’ of the busy social bar and café space.

However, it appeared that the familiar context of the Café/Bar held such dominant meaning and associated behaviours for people that our small ‘out of place’ booths couldn’t

compete with that. We watched people enter the Tobacco Factory and head straight to the bar to order their drinks or seek out a friend so focussed on that activity that they walked straight past our shower booth without even glancing at it. It reminded us of the ‘Inattentional blindness phenonmenon where viewers asked to count the passes made by basketball players in a short video fail to notice a gorilla which slowly walks across the screen. In a more serious experiment, 83% of radiologists failed to see a gorilla image when checking lung X rays for cancer. Again, this was a significant lesson for our work. Because of selective attention and the power of context, it is much harder to disturb people’s familiar environment than we had envisaged. We see and hear what we expect (or want) to see and hear and fail to see what we don’t. That is a major challenge for our work – how do you fit in with an environment enough that people notice what you’ve done but introduce things which are strange or unfamiliar enough to surprise and challenge ways of thinking and acting?

Some people have already asked me “was the installation a success?”. I don’t know how to answer that as I’m learning that such questions don’t make sense in work like this – art is about the process, not about achieving an aim. However, as an experimental psychologist, I realise that it’s much the same for me. Each experiment (formal or informal) moves your thinking and understanding on and the experiments which “work” (whatever that means) are often, in the long run, less significant than the ones which didn’t “work” or certainly didn’t turn out the way you expected.

So, as larks and ravens, we now reflect through writing, drawing and talking as we ponder our next experiment……

Thank you to my fellow artist larks and ravens: Pip Woolf and Kirsty Claxton for introducing me to new ways of being and experimenting…. 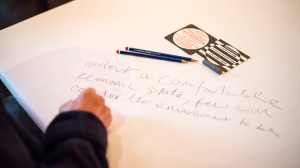 If you’d like to respond to the Larks & Ravens’ work, then we have a shareable Textwall – where you can post a comment directly or, with a mobile ‘phone, text L&R followed by your message to 020 71 83 83 29.

1 Response to An Experimental Mix of Birds, Psychology and Art